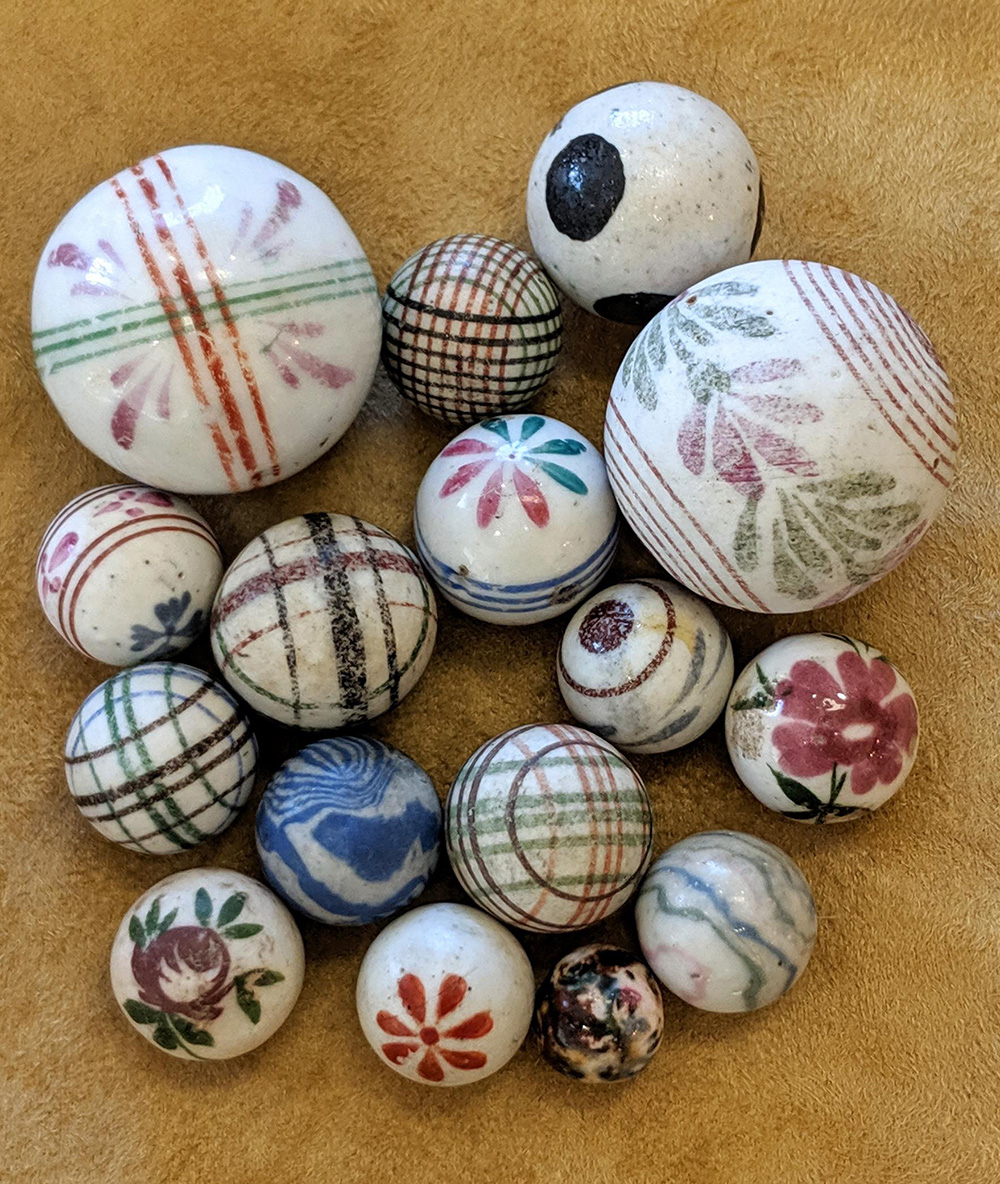 Chinas are handmade marbles that are very old and range from the 1840’s to the mid German handmade era of the late 1800s.  They are made of a whitish bisque material harder than clay.  They typically have hand painted designs of geometric or concentric lines or rings, and sometimes leaf-like or track patterns as decoration.  Paint fades over time and is a factor of condition, as they rarely chip like a glass marble would.

They come in two varieties (glazed and unglazed) depending on whether a clear coating was applied to the marble during the kiln-hardening process or not.

Unusual chinas include bullseyes or circular rings, and intricate plaid-like heavy geometric patterns, or intricate leaf sprays.  Thicker lined bullseye chinas are known as donut bullseyes, and bulls eyes that are completely filled in are older varieties from the 1850-1860s and are rarely seen.

Generally the busier the marble is with painted detail the more collectible it becomes.

Very rare and hard to find chinas include the “Checkerboard Chinas,” which are usually glazed about 13/16” and completely covered with alternating squares of different filled in color.  Few collectors have these in their collections.

Ultra-rare Chinas are the “Scenic Chinas,” which have pinwheel leaf spray at each pole and a scene painted around the equator of the marble.  These are generally found to be in size range of 1-1/4” to 1-1/2”. Most are unglazed.

Other Types of Non-Glass Handmade Marbles:

Other types of non-glass marbles that are common among the China era were the Lined Crockery (white bisque with blue and or green lines of dyed matrix material folded into it).  Rare ones include pink lines.

Benningtons were clay marbles glazed with a blue or brown glaze and baked in a kiln.  They have characteristic “eyes” or circular areas that look like eyes from where the marbles touched up against one another during the glazing and kiln firing process, allowing a heavy ring of glaze to pool around the contact area.   All are common and carry little value.  Exceptions would be larger examples of over 1” or fancy benningtons (white base with blue and brown spots of color).

The very most common non-glass handmade marbles used among the kids who played marble were the common clays.  Sometimes they were made more fancy by dying, painting (single color), or foil wrapping them.  All are common and carry little value.

Limestone marbles that were hand-hewn and ground round in European grist mills appear similar to common clays, but are colder and heavier to the feel.  They often will have a pattern of limestone sedimentation rings or residual flat spots from the hand-hewn cubes they started as before they were ground round.  They unfortunately carry little value in spite of their age and the amount of effort it took to make them.  They are under-appreciated.

Carnelian Agate marbles were rounded by hand on a grinding wheel and have many micro facets. There is an entire section in this site dedicated to these types of marbles.