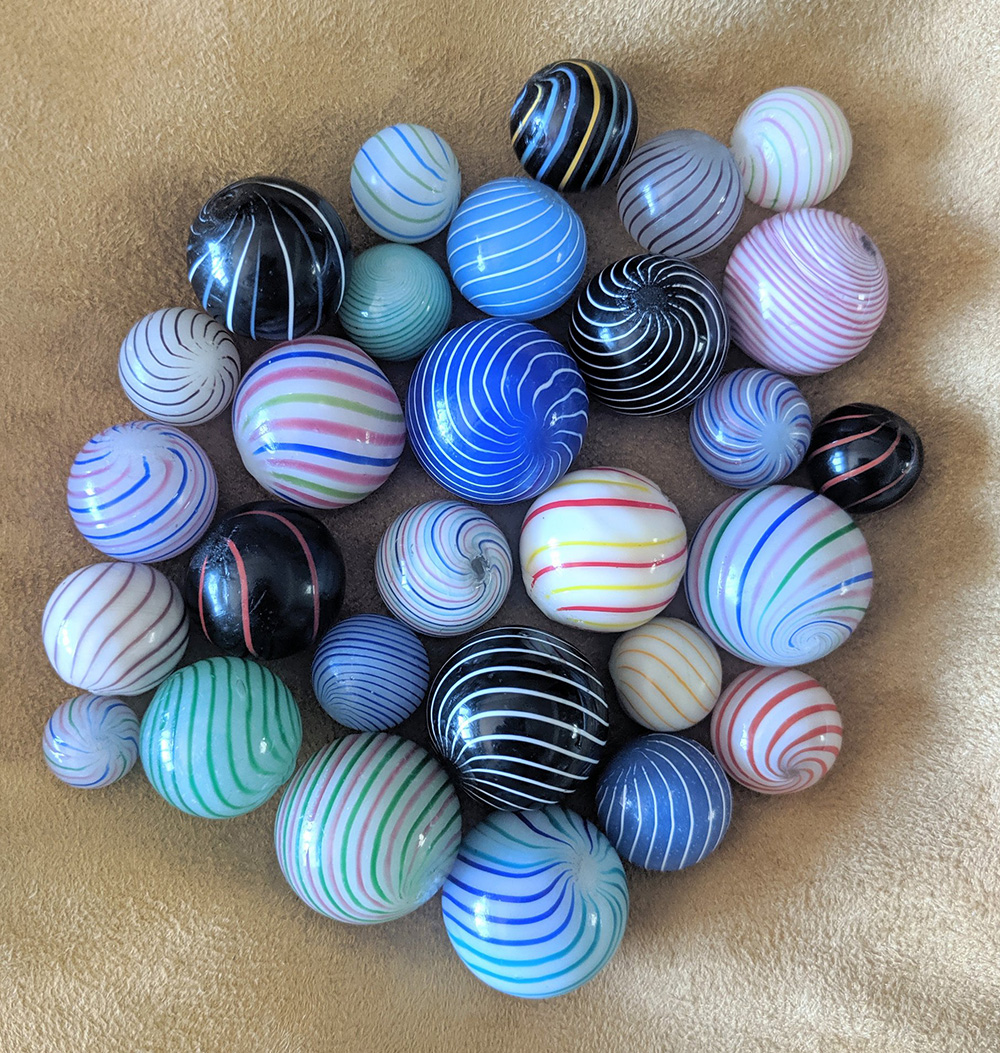 These German handmade marbles are distinguished by 6 or more surface threads or lines of usually a single color (red or pink, green, and blue ) over an opaque or semi-opaque milky white base glass matrix.  There will be no clear surface glass over the lines. Since the milky white base glass sometimes resembled clam juice…they became known as a “clambroth.”  White based clambroths are the most common and can vary in opacity from completely opaque white to nearly transparent base.  Although there’s not much difference in value, transparent base clambroths are a little tougher to find.

Clambroths are early handmade marbles, generally constructed between 1850 and 1880, and because of this will have faceted pontils.  Any clambroths made after 1880 will typically have rough unfaceted pontils.

Clambroths are a lighter weight & more brittle glass than most marbles and chipped easily and did not hold up well to play action, so did not become a favorite seller, therefore fewer were made.

Symmetry and spacing of the lines are important to collectors.  If there are wider gaps or missing lines it will make the clambroth less desirable.

Most common sizes are 9/16-3/4”.  Any clambroth over ¾” regardless of color will generate a premium.  Clambroths are rarely found 7/8” or larger.

Clambroths with 2 or more color lines are more highly sought after.  The more colors the better is a general rule.  Certain colors are rarer than others.  Yellow and Black are always rare colors, even if it’s a single color clambroth.

Cased Clambroths are a variety of clambroths constructed differently, and are generally work 2x that of a typical clambroth.  They are constructed similar to an onionskin or a peppermint swirl with an inner clear core, then a thin layer of white glass with lines applied to the outside of that, then a casing of outer clear glass over the lines.  It will have a “dark” spot in the center of the pontil from the shaded inner core of clear glass. If you look through the marble you will see the core is clear.

Rare line colors include yellow or black, which are rare regardless of the base color of the marble.

End of cane or left twist examples of Clambroths of any color type are rare!