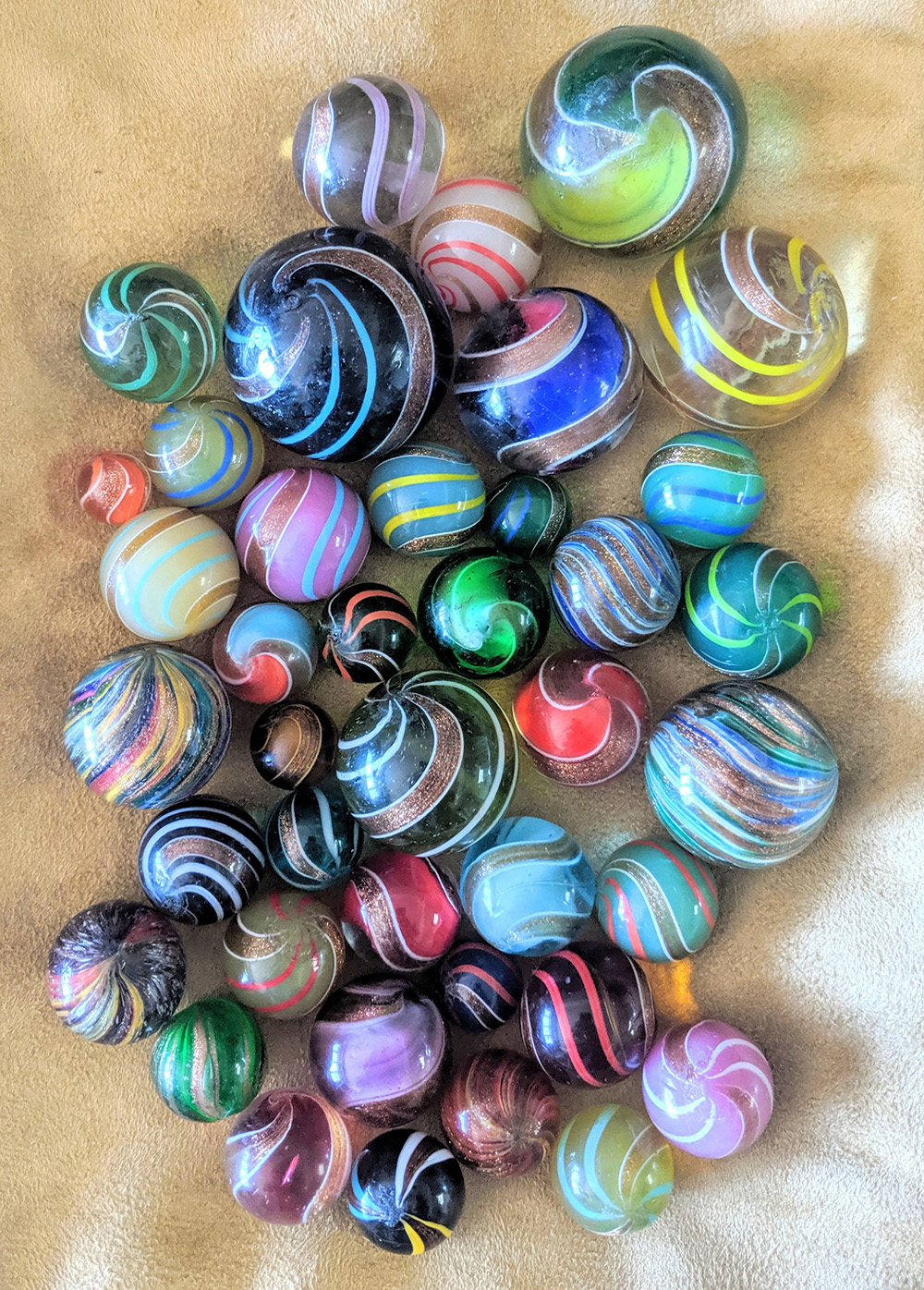 Lutzes are German handmade marbles that are identified as having a copper metal inclusions that make them shine and glitter like gold.  They are not gold, although some are worth more than their weight in gold.

Lutzes will usually be one of 7 varieties.   I will describe each type and identify any features that make each type rare or unusual.

The clear glass lutz is the most common of all 7 varieties of lutzes.  All banded lutzes (clear glass, colored transparent glass, and opaque glass varieties) will be constructed the same… with 2 bands of lutz opposite each other (trimmed in white), and 2 ribbons of white or color between each lutz band, with a total of always 4 bands (all same color), and will be coated with a clear transparent coat of glass over the color bands and lutz bands.

There are not many rare varieties of this type.  Clear glass lutzes with white bands are the least common.  What would make this variety uncommon or rare would be if the colored bands are not all the same color, or if the thin accent lines along each margin of the lutz bands were any color other than white.

Colored transparent banded lutzes are exactly the same in design as the Type 1 lutz in construction, except for they have color to the transparent glass matrix.  They are less common than the clear glass variety, but white is a common color of the bands.  Red or purple base glass color or bands would be less common.

Colored transparent banded lutz 7/8” or larger would be uncommonly.  Peewees of ½” or less are uncommon.

Opaque banded lutzes are the rarest of the banded lutzes because they are light weight and made of very brittle glass that chip easily, therefore they were in low demand by the children, and fewer were produced.

There are degrees of opacity from completely opaque to some translucency. Most common colors are black, with blue or white base colors common as well.  Some black opaque banded lutzes are maglights, which mean when back lit they they trans-illuminate a matrix color other than black, most commonly purple.

Unusual color matrix glass would be vaseline yellow, opalescent green, or custard.  Rarely will you see other colors, which can be exceedingly rare, such as dark green, smoky grey, pink, or dark caramel.  I have never seen a true purple or red base opaque banded lutz.

White bands are the most common on opaque lutzes.  Rare color combo varieties exist to make each base color more desirable.

Opaque banded lutzes that are 7/8” or larger are rare.  Any that are over 1” are exceedingly rare.  Peewees of ½” or smaller are uncommon.

Ribbon lutzes are actually two ribbons (usually of different colors but not always) with a lutz band joining them together on the ends to look like a thick naked ribbon.  There are versions of ribbon lutzes that are in colored transparent glass (but usually the ribbons will be white so they can be seen).  White ribbons lutzes in clear glass is uncommon.  Unusual color combinations are cinnabar when paired with any other color such as baby blue.

Ribbon Lutzes 7/8” or larger are rare. Peewees of ½” or smaller are also uncommon.

Onionskin lutzes are basically onionskins with lutz applied randomly to the onionskin layer.  There is typically no pattern to the lutz on these marbles.  It can be a mist of lutz, streaks of lutz or clumps of lutz.

Mist lutzes come with a green base glass or a black base glass with a haphazard application or “mist” of lutz over the color, cased in clear glass.

Indian lutzes are the rarest type of lutzes.  There are 3 varieties listed below in increasing rarity.

Lutzes are late period German handmade marbles, and will typically never have faceted pontils.  Of the few faceted pontil lutzes I have seen, they have all been onionskin lutzes (which was a common pre-1880 variety).  Most onionskin lutzes have rough pontils, but this indicates that the earliest lutz marbles were the onionskin lutzes and that they began production near or slightly before the 1880 date of production efficiency when they decided to discontinue faceting pontils.

End of cane or left twist examples of Lutzes of any type are rare!