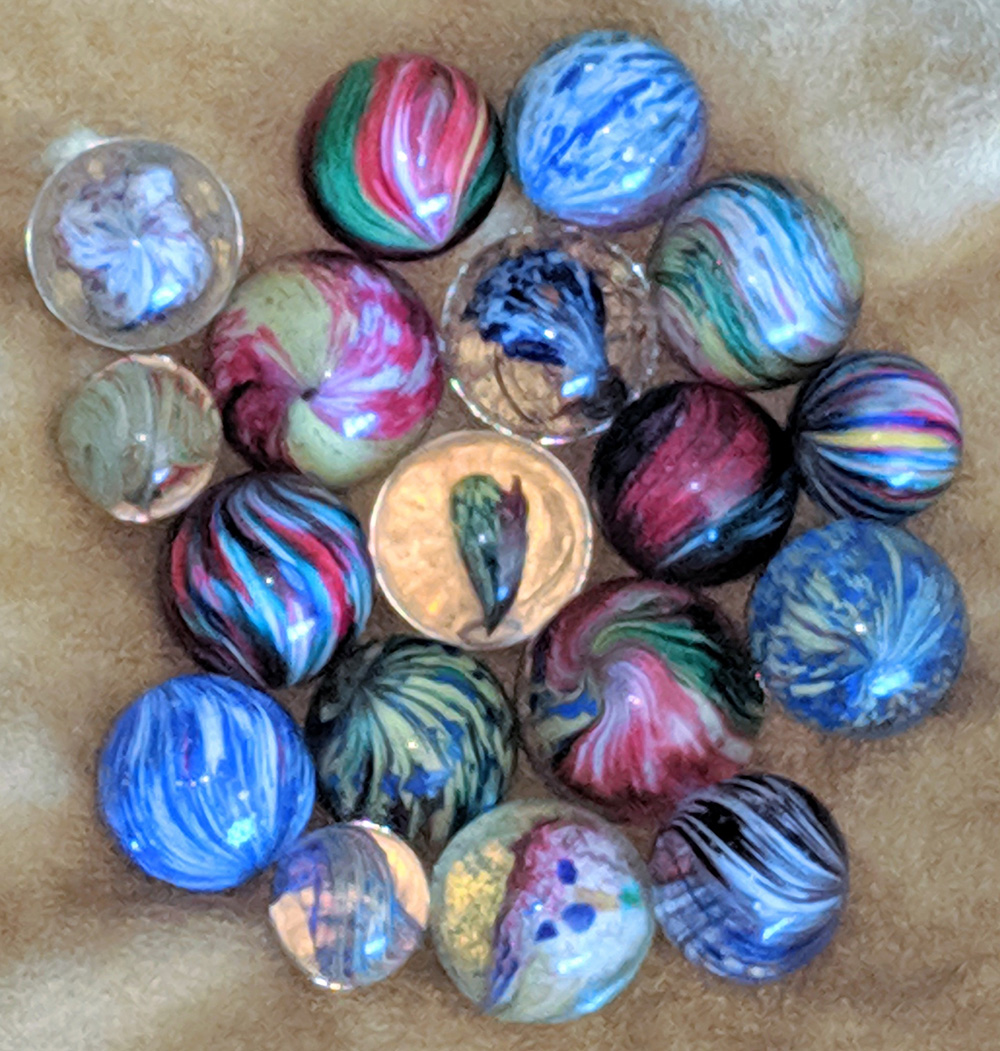 German handmade Onionskin marbles are frequently a favorite among marble collectors because of the large numbers of varieties, and the colorful patterns found within them.

Onionskins are constructed with a clear core surrounded with a “skin” of opaque white or opaque yellow base color with other colors arranged in haphazard lines or dots over that to create a myriad of patterns and designs that the Onionskins are known for.  They are always cased in a clear layer of glass over the colored glass.  If you look through the onionskin from the pontil end you will see that the light travels through the marble because of its clear core.   On occasion Onionskins will have a “starter core” of a thin left over different onionskin cane that was built up with clear glass and the new colors applied.  This is a unique feature sometimes seen, but does not particularly influence value or collectability.

If an Onionskin is composed of entirely dots of color, it is commonly referenced as an “End of Day” Onionskin, with the thought being that at the end of the day the maker was using the left over pieces of glass to make his marbles.  This was likely not the case, however.

Usually Onionskins will have two pontils (like most German handmades), but sometimes they have only one if they are the first off the cane.  These are rare because most were discarded and few were made into marbles.  If an Onionskin is the first off the cane but the color does not come to the surface like an End-of Cane would, but rather is encased under a cap of clear glass, it is called a “Cloud,” and looks a little like a hot air balloon.

Onionskins will sometimes be found as “left twist” marbles, meaning a counterclockwise twist to the marble when viewed from the pontil.  Left twist Onionskins are found more commonly than any other types of German handmade marbles for some unknown reason.  Left twist marbles are always a premium.

Onionskins with Mica are unusual, but seen fairly commonly.  They demand a premium over typical onionskins.  Onionskins with mica are essentially onionskins that contain mica flakes applied to the surface of the onionskin layer inside the marble and typically worth multiples of an onionskin that has no mica.  The more mica the more value it has as a typical rule.

There are several RARE varieties of onionskins:

Rare varieties are rare in all sizes and especially anything over 3/4” or in the peewee class.